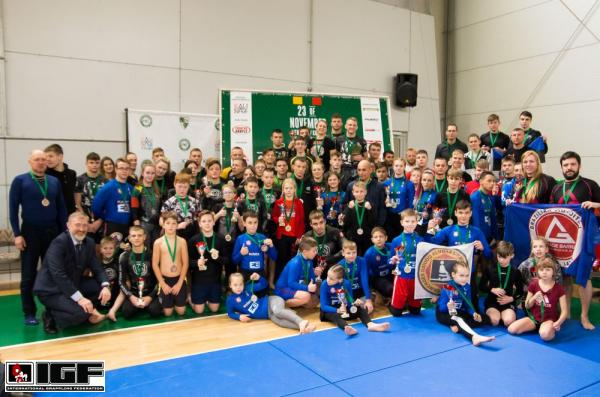 Lithuanian grappling wrestlers once again have proved their strength – this time in the World Grappling Cup tournament. In the biggest tournament of the year held in Kaunas Lithuanians won three of the four finals in the absolute weight category.

Kyrgyz fighter triumphed in one discipline only, namely, in the category of men with kimono. In individual weight categories medals were won by Latvian, Russian, Estonian, Ukrainian and Belarusian athletes.

“After big tournaments, two aspects are always important - how well the event was organised and what was the performance of Lithuanian athletes. I think that after this World Cup we can be proud of both things,”- said Adrijus Kupstas, President of Lithuanian Grappling Federation.

An impressive atmosphere was created in the final of the absolute weight category where Laimonas Stančikas from Vilnius became winner in the discipline of men without kimono by defeating another ‘Smauglys’ club representative - Lukas Pelakauskas. Kyrgyz representative Abdyldabek Kekenov took the third place. Nevertheless, he became winner of the absolute weight category in the discipline of men with kimono. In the final, A.Kekenov defeated Ukrainian fighter Nikita Shahoiko.

The winner of the absolute weight category for girls without kimono became Yulia Stoliarenko who has won numerous champion titles before in many different combat sports.

This time in the final she defeated world champion Aida Vasiliauskaitė.  However, Vasiliauskaitė triumphed in the category with kimono.

"It is very difficult to evaluate such things objectively, but it seems to me that this World Cup tournament was one of the strongest in the history of grappling tournaments,” - said Kupstas.