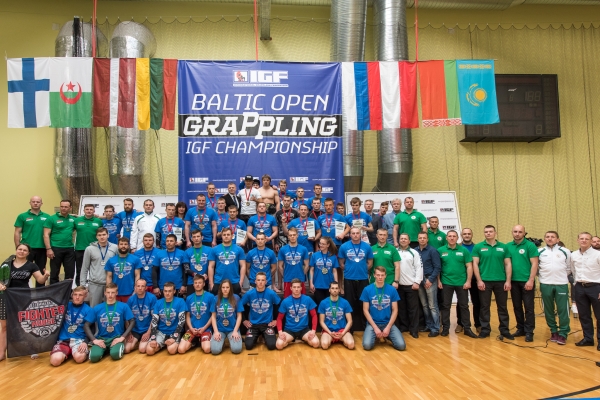 First time of history organised open Baltic countries grappling games to Jurbarkas attracted 159 this sport lovers, which represent not only to Lithuania, but also to Latvia, Poland, Russia, Belarus and Kazaksthan. The leader of Baltic grappling games became Teodoras Aukštuolis from Ukmergė.

„The first battle was very hard and the leader of first battle revealed only after continuation. After, the battle became easier to me and I confidently pursue to be the winner. Im happy about joining – all in time, any interference. The organizers done good job“,- said not long ago returned from Japan one of the most talented Lithuanian fighter, which already wore absolute weight category belt.

Just only a few weeks ago joined to international grappling federation the delegation of Kazaksthan into game brought two sportsman. They both became the winners of they weight category, and Alinas Katanas – the winner of absolute weight category between veterans.

„I will be honest. We arrived both, because we wanted to appreciate the movement of grappling in Lithuania. We didn‘t imagine the level of grapplig here and what to expect. By the way, we wanted to see your country.. We are fascinated“, -said Alinas Katanas, the president of grappling from Kazaksthan.

Between young grappling fighters, as usual, unsurpassable was Deividas Matusevičius, between the nineteens – Danielius Grėbliunas, and between girls – one of the strongests Lithuanian fighters Julija Stoliarenko.

We have avoided bigger sensations. Julija, Deividas and Danielius are all really strong fighters, so it is not a big surprise, that they became winners of their groups. Talking about the tourney, we do not want to compare ourselves, but fighters from foreign countries were not dissapointed. It is what matters the most.

"One tourney is over - lets prepare for another. This year European championship will be held in our country, so there is a lot of work to do. And these Open Baltic grappling games will be written in history as first of its kind. ", - said Kęstutis Smirnovas, the president of European grappling federation.

European championship is going to be held on Septemper 24 at Kaunas.