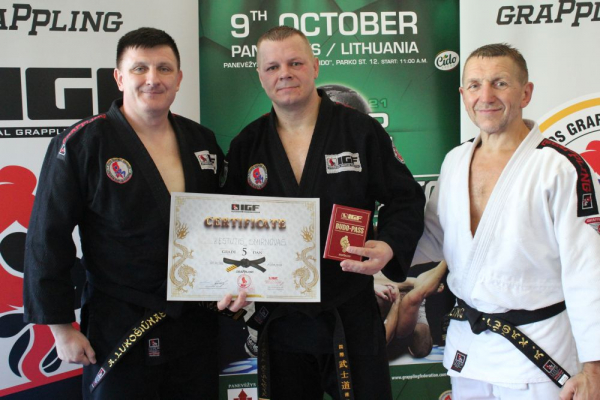 “Every athlete has a goal to be valued, so I would be lying if I said that this award is not pleasant. All in all, it is an interesting year. In June, I became the winner at the Baltic Championship in both the discipline with and without the kimono, and now this title has been awarded”, said the holder of the Fifth Dan black belt.

The official belt award ceremony was held at the traditional international camp in Palanga, where a lecture was also presented by the Brazilian legendary fighter, the Fifth Dan master of Brazilian jujitsu, Iran Mascarenhas.

“As I expected, we had a top-level camp. Personally, I am most pleased that our athletes had the ideal conditions to prepare for the World Grappling Championship”, noted K. Smirnovas.

The nearest event organised by the International Grappling Federation is the World Grappling Championship, which will take place on the 9th of October in PanevÄ—Å¾ys. K. Smirnov, the holder of the Fifth Dan black belt, also plans to try his hand at this Championship.